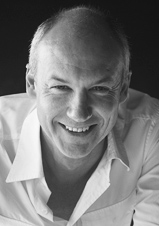 Mark Brady is a leading Australian producer with a passion for making live entertainment infused with cultural richness and diversity accessible to western audiences.
Representing the third generation of an entertainment business family, Mark Brady was breathing showbiz from a young age; Mark’s grandfather was a major venue owner and restaurateur in Berlin during the roaring twenties when the Cabaret era flourished; and Mark’s father, Tony Brady is recognised as one of Australia’s most respected entertainers and experienced producer/promoters in Australia and around the World. Consequently, Mark was introduced to the entertainment world from backstage, where he would watch his father, 50s bandstand singer Tony Brady perform.

In the early 90’s Mark and Tony began developing the theatrical show arm of the business. Mark’s first success was Gaelforce Dance, which he co-created during the era of River dance and Lord of the Dance. His first foray into producing proved hugely successful and Gaelforce Dance went on to tour Australia, New Zealand, and USA, Canada and spent three years touring Austria, Germany and Switzerland.
In London during the late 90s, Mark was introduced to show playing on the West end called Lady Salsa. This production instantly caught Marks attention and so the love affair with Cuba began. Mark collaborated with the shows original producers and together they re-produced, recreated and re-launched Lady Salsa in Australia. It was a great success and it has spent the next 5 years touring Europe, Australia and South East Asia.

Motivated by the great reception by audiences for Lady Salsa and inspired by the famous documentary Buena Vista Social Club, Mark collaborated with the co producers of Lady Salsa and investigated the famous quarter in Havana of the same name, Buena Vista. Home to the intensely passionate music and dance for which Cuba is famous, they created an extraordinary show The Bar at Buena Vista featuring three legends from the era of the Buena Vista Social club, who tell its history through music and dance. The Bar at Buena Vista has been touring the world consistently since 2004. Now in its 13th year El Bar continues to pack out houses particularly in Germany, Austria, Switzerland and France.
In 2010 mark commenced conceptualizing and working on a new production from Cuba utilizing the incredibly high level of talent found in classical and contemporary dance. Ballet Revolución was born and premiered in Australia in 2011. Since then Ballet Revolución has successfully toured for the past five years and has proudly played three sold out seasons in London’s West End. Now, moving into 2018, Mark Brady is revisiting his love for Cuban culture with Ballet Revolución and a new touring production. The show goes from strength to strength. With three new original productions in development this story is far from over.

In 2003, Mark was inspired to investigate India and the Worlds most prolific film industry namely Bollywood. Mark commenced researching and was enamoured by its cultural majesty and diversity.  A new production was born direct from Film City Mumbai. The Merchants of Bollywood. This show has received 5 star reviews from some of the Worlds most respected publications such as the London Times, The New York times and the Guardian. Now in its 10th year and just completing it’s third season on London’s West End, The Merchants of Bollywood continues it’s success story internationally.

During this time, Mark also produced smaller shows such as Kings of Salsa and traditional Irish folkloric shows around regional Australia including Spirit of Ireland and Celtic Reign and was assigned touring rights for Red Bull Flying Bach, Shadowland amongst many others.

In 2017 Mark acquired the touring and production rights for the iconic and legendary Cabaret, Crazy Horse Paris.  Established in 1951 mark was immediately drawn to the shows history and cultural importance in Paris. Australia was treated to an incredible 10-week tour taking in all major cities for le Crazy’s first tour ever produced down under. Mark then took the production onto Singapore and Macau. Le Crazy was a major event for the Australasia and certainly not the last.