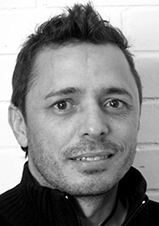 Marcos Alonso Brito was schooled in electric guitar at the Escuela Nacional de Arte in Havanaand graduated in 1999. Marcos started his professional career in 2000, as a member of Afrocuba, a group which is recognised throughout his native Cuba and internationally.

Marcos joined the nationally and internationally renowned band Carlos Manuel and His Clan in 2001 and stayed with that band after they changed their name to The Clan, under the direction of pianist, Pedro Camacho.

He has been a member of the orchestra Gardi, the group Sugar Band and has accompanied the singer Leonie Torres. Marcos is in high demand as a studio guitarist and was featured as ‘Andi Montanes’ on Cuban and International recordings, many of which have earned Grammy Latino AwardsFurthermore he is an accomplished composer and arranger.

Marcos was lead guitarist for the shows Lady Salsa and The Kings of Salsa and is a valued member of the touring band for Ballet Revolución. When he is not touring, Marcos is Musical Director for Adrian Berazain in Havana.