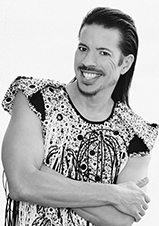 He’s the king of high heels. No one knows how to walk safely on 18-centimetre heels better than he does. Anyone hearing “Hola Chicas” immediately knows who’s talking; the “Chicas Walk” is his trademark. Jorge González has made a name for himself in Germany through numerous TV appearances.

The graduate nuclear ecologist Jorge Alexis González Madrigal was born in 1967 in Cuba and discovered as a model in the former Czechoslovakia. Parallel to his studies in Bratislava, he made his first contacts in the fashion business during stays in Prague. He soon became a stylist and fashion choreographer for renowned designers and organized fashion shows. After completing his diploma, he moved to Hamburg. He quickly became involved in relevant campaigns and still works with international designers and brands to this day.

From 2010 to 2012 he appeared as a catwalk trainer and model coach on the TV casting show Germany’s Next Topmodel by Heidi Klum – and became the favourite of the audience in no time. Jorge released the song “Don’t Touch My Shoes” in 2012. In his biography (2013) Hola Chicas – Auf dem Laufsteg meines Lebens (Hola Chicas – On the catwalk of my life), the popular figure talks about how he had to fight his way into his present life. In 2014 he opened the “Chicas Walk Academy” in Hamburg, in which every woman could learn to walk self-confidently through life with a great posture and type-appropriate style. Jorges motto: “The way you walk, determines how you´ll get through life”. From 2013 to the present day, Jorge has delighted viewers as a juror of the german RTL dance show Let’s Dance with his charm, wit and infectious Cuban passion for life. In 2019 he will be part of Let’s Dance – The LIVE Tour. In the show he dedicates himself to his second great passion: dance. His first career wish as a child was to become a dancer. Jorge González is therefore particularly pleased to have been able to combine his passions for fashion and dance at Ballet Revolución as a costume designer since 2012. In 2019/2020 he will also be creating the designs for the tour, which showcases his refinement and unerring feeling for dance highlighting the skills of the Cuban dancers. In spring 2019 he appeared as an international expert in the new CBS talent show The World’s Best (USA).

From 2012 until today, Jorge González has also repeatedly taken on roles in TV series and feature films: most recently around 2018 in the ZDF feature film series Herzkino. Märchen, in the SAT. 1 movie Unsere Jungs (Our Boys) and in the ARD children’s show Die Pfefferkörner (The Peppercorns); in autumn 2019 he will be featured in the German cinema production Eine ganz heiße Nummer 2.0.