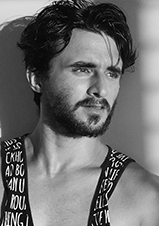 Graduated from National School of Arts in Contemporary and Folkloric Dance on 2013. After graduating Andres joined Danza Contemporanea de Cuba Company and at the age of 23  became first dancer of the company.  Since the end of 2017 is  part of the cast of  Danza Abierta now called MICOMPAÑIA company.

Throughout his professional career, he has participated in several tours to Germany, Switzerland, Monaco, England, Scotland, Mexico, Colombia, the United States, Russia and Canada, performing in renowned theaters and working with prestigious choreographers from all over the world Lilly Cowie, Jan Linkens, Fleur Darkin, George Céspedes, who have helped him improve his style and technique.