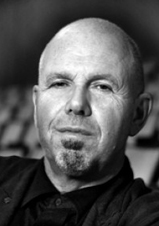 Michael Brenner founded BB Promotion – The Art of Entertainment in 1987, and his passionate commitment to a high-quality genre mix of theatre, dance and concert productions is still at the heart of the BB Group today.

A visionary entrepreneur, he soon had the productions of his company showing in the most important theatre, concert and festival halls, among them the Berlin State Opera, the Semperoper in Dresden, the Hamburg State Opera, the Théâtre du Châtelet in Paris, Sadler’s Wells Theatre in London and Lincoln Center in New York.

Michael Brenner’s productions like Richard O’Brien’s Rocky Horror Show and the award-winning West Side Story brought him international recognition. He successfully produced long-running musicals like Grease, Saturday Night Fever, Chicago and WE WILL ROCK YOU, and also discovered new show formats like STOMP. He presented world-famous dance companies such as Alvin Ailey American Dance Theater and the Martha Graham Dance Company in Germany and Europe, and in south-west Germany presented pop and rock giants like Bob Dylan, The Eagles, Stevie Wonder, Bruce Springsteen, Queen, Sting and The Rolling Stones.